Box. 20cm. With door on one side. On another: 3 leds, 2 buttons, 2 variable resistors, temperature sensor.

Open door through interacting with controls. There could be small reward in box. There are 3 tasks, each task have one or more inputs, and led. If player acted towards task (e.g. pressed correct button), corresponding led will blink. If player fulfill task, lets stays on. Next task could be completed, only if previous tasks are completed. 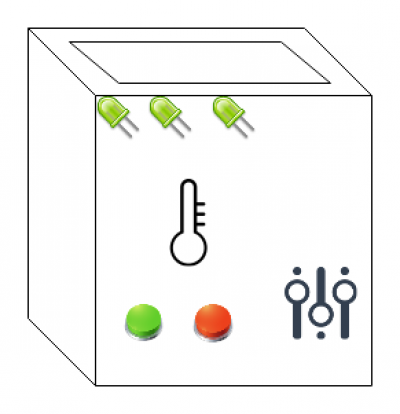 Task 1: rotary encoder should be rotated 25 times any direction. When completed, 1st led remain on.

Task 2: green and black buttons need to be pressed down and red not pressed. If input changes, led goes off.

Task 3: light sensor should get significantly less light than it got during start.

How to win: rotate encoder until light stays on. Hold green and black buttons, so 2nd light is on. Cover light sensor with hand/finger, so 3rd light is on. Now all lights are on, and logic could open door (box and motor are missing from prototype). 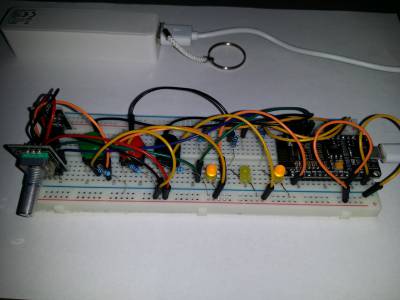 Just example for above prototype:

Except where otherwise noted, content on this wiki is licensed under the following license: CC Attribution-Noncommercial-Share Alike 4.0 International